In 2016, 3.5 percent of all transactions on Classy occurred on Giving Tuesday alone. That’s 13 times more than a typical day on the platform. Overall, the movement raised $177 million worldwide, a 50 percent increase from the previous year. These incredible Giving Tuesday data spikes speak for themselves: people are participating in the movement, and it warrants your attention.

Nonetheless, some organizations are still hesitant to join in on Giving Tuesday. They think their efforts will decrease donations in other campaigns, like year-end fundraising.

To address these concerns, we compared the Classy platform’s donation volume on Giving Tuesday to that during year-end giving, specifically around December 31, and disaster relief. We also compared Giving Tuesday donation volume to typical days 4 and 6 weeks earlier, to have comparison points that aren’t affected by the strong day-of-week and monthly trends in fundraising data.

According to our platform data, these concerns couldn’t be further from the truth. Instead, we found three things in our Giving Tuesday data analysis that make this day unique from any other giving day we’ve examined:

Our Dive Into the Giving Tuesday Data

We began by looking at the fundraising trajectory for the week before and after each event, over multiple years and occurrences [1], and both across the entire platform and within specific cause categories. This helped us assess consistency, both within an event and across events.

From left to right, these graphs showcase data surrounding:

While previous analysis has drawn similarities across these events we actually find very little similarity. The Giving Tuesday data show a clear peak on a single day, end-of-year fundraising shows a slow ramp to a peak on December 31, and disaster relief tends to show extended elevated fundraising over a week following the disaster as media coverage continues to unfold.

These Giving Tuesday and end-of-year fundraising trends were also consistent year over year, while disaster relief fundraising was extremely variable both across the platform and within specific categories. Disaster relief is also quite different in that it tends to focus on a specific location and cause category.

For example, as you can see in the figure below, Hurricane Harvey focused on Texas and fundraising spiked in the disaster relief cause category, as defined by the National Taxonomy of Exempt Entities (NTEE).

In contrast, Giving Tuesday is national with plans to grow internationally, and engages organizations across all cause categories.

After reviewing these results, we analyzed recent examples of each event [2] to better understand how donor behavior drove these various trends. In doing so, we found three core differences between Giving Tuesday and other events that all indicate a prime opportunity for fundraising.

Giving Tuesday Brings In New Donors (Who Stick Around)

Our Giving Tuesday data show that this day is an absolute bonanza of new prospects. It brings in twice as many new donors as December 31, three times more than a typical day during disaster relief, and over 13 times more than a typical day. For each of these events, 75 percent of one-time donations are made by first-time donors—and because Giving Tuesday generates more traffic than any other day, it results in the largest influx of new donors.

Typically, strong acquisition channels like peer-to-peer fundraising campaigns can show lower retention rates, purely because the number of new donors is so great. But that’s not the case with Giving Tuesday.

Giving Tuesday Brings In New Donors Who Are More Engaged

It’s not just the volume or retention of new donors we find interesting. These donors are also, clearly, much more engaged supporters for the organizations that they give to. We see this in three ways.

First, these new donors interact with a more diverse array of campaigns hosted on Classy than donors acquired on December 31, who tend to give through donation pages. Donation pages are excellent for obtaining recurring subscriptions, but compared to ticketed events and peer-to-peer campaigns, they have relatively low donor engagement. 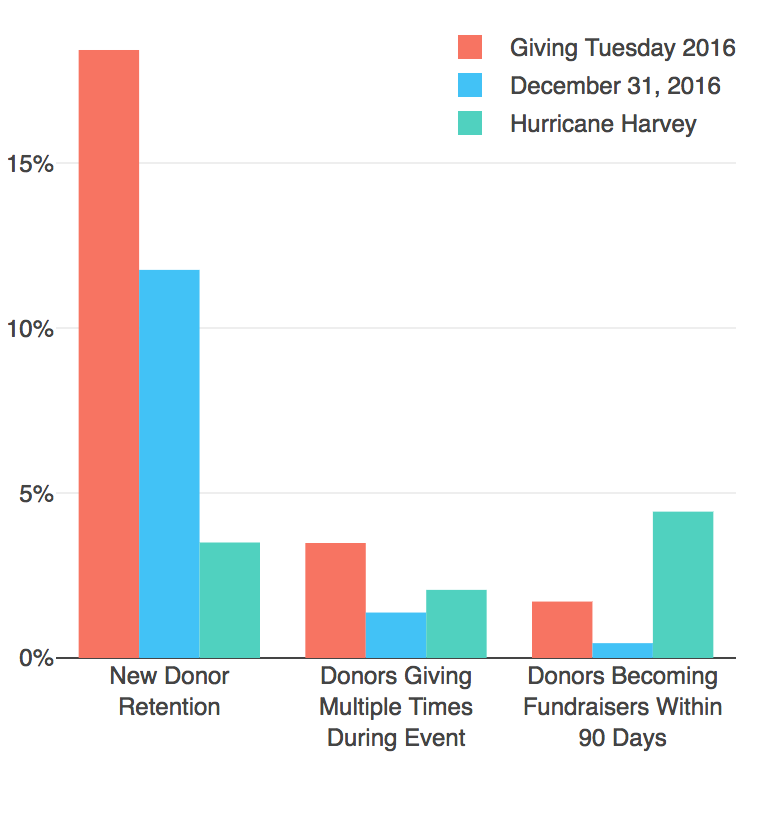 As a final cherry on top, Giving Tuesday donors are so motivated that they are 60 to 150 percent more likely to give multiple times to the same organization on that single day, compared to donors on a typical day, during end-of-year fundraising, or even during a disaster relief event. Incredibly, we see some donors giving up to 37 times on Giving Tuesday alone.

In light of these findings, here are some ideas and best practices to consider for your Giving Tuesday efforts:

Given these trends, it’s clear that nonprofits can no longer afford to skip out on Giving Tuesday. This unparalleled opportunity to acquire and engage donors happens once a year, and you can design a campaign that activates your community and jumpstarts your year-end fundraising.

Head to our Giving Tuesday website below to get your own tool kit, submit your Classy campaign to be featured, and on the day of, follow the growth of Giving Tuesday with up-to-the-minute stats, leaderboards, and more.

If you find these analytics interesting and want to join in, let us know! We’ve published our analyses and data to give some insight into the work we’ve done here and to share some of our tools. We’re also actively participating in DataKind Data Dives in collaboration with 92nd St Y on understanding giving behavior, as well as contributing to other open-source projects. Hit us up to get involved.

[3] Variability in temporal and spatial focus per event, as well as smaller sample sizes, also make any such analysis challenging to generalize over disaster relief events.

SEA is the national membership organization for social enterprise in the U.S. Are you ready to join the movement?

SEA is the national membership organization for social enterprise in the U.S. Are you ready to join the movement?